Are you a Sherlock Holmes fan? Then this post is for you! We will highlight the best Sherlock Holmes attractions all over London near Baker Street, the fictional home of the great detective (round the corner from Montagu Place). So pull out your deerstalker hat and tobacco pipe — let’s investigate the locations frequented by the world’s most famous detective!

Sherlock Holmes has been a popular fictional character since the release of A Study in Scarlet by Sir Arthur Conan Doyle in 1887. Readers quickly grew to love this super sleuth with uncanny observational skills, forensic knowledge, and logical reasoning.

As the years have passed, Sherlock has only become more popular and is now one of the most well-known literary characters in the world. The character has gone on to appear in dozens of films and television series. In fact, Sherlock Holmes has been in more films than any other literary character!

Here are some of the locations which share a connection with the literary, film or television versions of this genius detective!

Take a Stroll Down Baker Street
Baker Street is synonymous with Sherlock Holmes and has appeared in many of the character’s films and television series. It is the location of 221b Baker Street — Sherlock’s apartment and laboratory.

There are many Sherlock Holmes-related sights on Baker Street including a nine-foot bronze statue of the character and Sherlock Holmes lookalikes. You might have to do some detective work to find 221b Baker Street though — it is located between 241 and 237 Baker street.

Make it happen: It is a very short walk to Baker Street from the hotel (0.3 miles) — simply head east along Montagu Place until you reach Baker Street. Alternatively, if you are elsewhere in the city, take the train to the Baker Street underground station. The best time to visit is during the day or early evening. Keep an eye out for Sherlock artwork — he is everywhere! 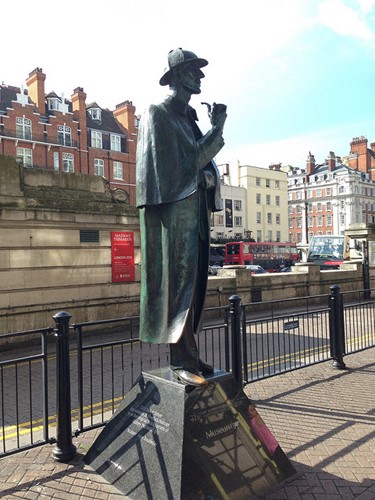 The Sherlock Holmes Museum
Once you find 221b Baker Street, you will discover it is actually a Sherlock Holmes Museum. The ground floor is filled with various antiques and knick knacks from around London while the top floor contains a huge amount of Sherlock Holmes memorabilia. The property is kept as it was in Victorian times when the first book was released. It is a fantastic first stop for Sherlock fans.

Make it happen: Simply walk a few minutes from the hotel (head east) or take the train to Baker Street tube station from anywhere in London. The museum is open 9.30 am — 6pm with Admission costing Adult £15 Child £10 (under 16yrs). Learn more about the Museum. 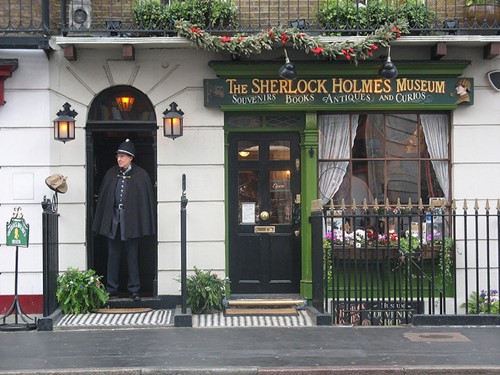 Make it happen: If you are on foot, simply continue east from the end of Baker Street towards the University of Westminster. Madame Tussauds is close to the University. It is approximately 0.5 miles from the hotel (11 minutes on foot). Tickets are currently £31.00 for adults and £25.00 for children. The museum is open 09.30 to 17.30 seven days a week. Learn more about Madame Tussauds. 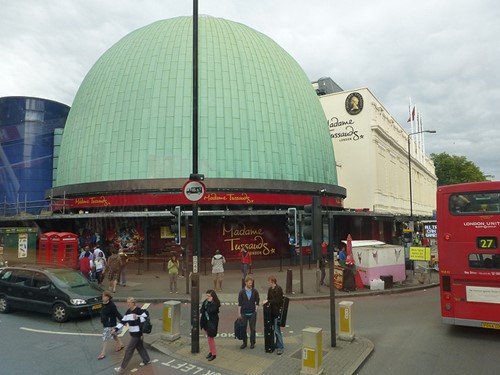 Sherlock Holmes Walking Tour
This 2-hour tour is an excellent way to see the most important Sherlock Holmes sights in a short space of time. It departs from the former site of the Criterion restaurant (now the Savini restaurant) on Piccadilly Circus and ends at The Strand.

Make it happen: If you are feeling fit, the walk to the Criterion restaurant is lovely, taking in both Hyde park and Green Park. There are also buses, trains and taxis to get you to the starting point of the tour. The tour is £12 for adults and £10 for children. The schedule changes throughout the year — learn more about the Sherlock Holmes Walking Tour. 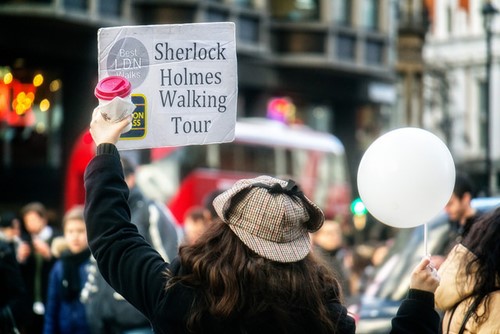 The Sherlock Holmes Pub
This beautiful old pub has retained many of the features of a traditional Victorian-era tavern. It serves some of the best pub food in London and is a perfect place for Sherlock Holmes fans to have lunch or dinner. To go along with the food, the pub serves some lovely traditional English ales and ciders.

Make it happen: The Sherlock Holmes Pub is located at 10-11 Northumberland Street, Westminster, approximately 2.7 miles from the hotel. If you are feeling fit, you could walk there for lunch, take a bus, the tube to Charing Cross or a taxi. Learn more about the Sherlock Holmes Pub. Make it happen: The Lyceum Theatre is located at 21 Wellington St, London. You can walk there from the Sherlock Holmes pub, take a taxi, take a bus or the train. Learn more about the Lyceum Theatre. 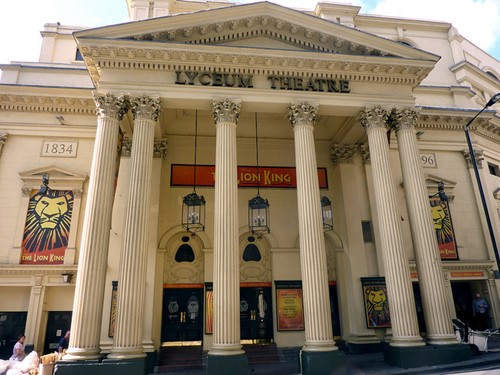 Speedy’s Cafe
If you are a fan of the recent BBC series, you may already know that it is not filmed on Baker Street — it is filmed nearby on North Gower Street. In the BBC television series Holmes and Watson often frequent a cafe on the street called Speedy’s Cafe. It has become a popular spot for fans of the series and they make some Sherlock Holmes themed food! 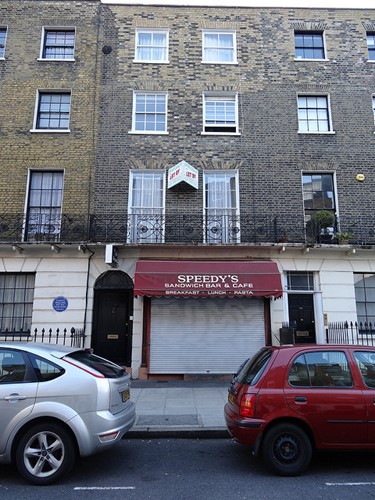 The Savini Restaurant in Piccadilly
The Criterion restaurant was replaced by Savini in 2015. This Milanese restaurant offers exceptional food and one of the best fine dining experiences in London. While at the restaurant check out the plaque which commemorates the spot where Holmes and Watson first met in the books!

Make it happen: As mentioned previously, it is a lovely walk from Montagu Place to the restaurant, but buses, trains and taxis are also available. Learn more about Savini. 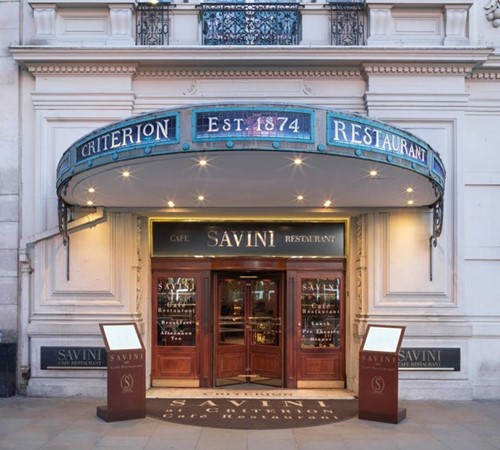 The St Barts Hospital
This hospital is featured twice in the BBC adaptation of Sherlock Holmes. In season 1, it is the location where Sherlock and Holmes first meet. In season 2, it is the building from which Sherlock Holmes seemingly falls to his death. This beautiful hospital was built in 1123 and features some incredible architecture!

Make it happen: St Barts is located approximately 3.3 miles from Montagu Place. There are plenty of ways to get there including a regular bus service. 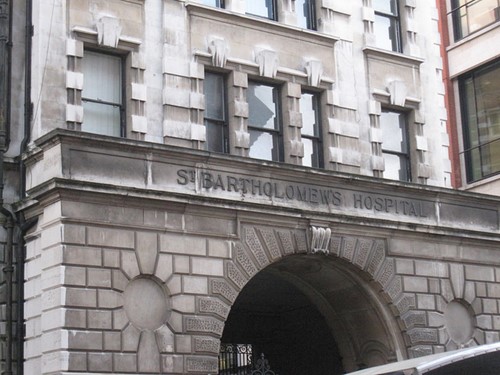 Café Royal
In the book The Adventure of the Illustrious Client, Sherlock Holmes almost loses his life outside this café. He is attacked by two men with sticks but Sherlock manages to fight them off! This venue has a long and illustrious history, attracting many famous writers over the years including Oscar Wilde and George Bernard Shaw.

Make it happen: The Café Royal is close to the Savini restaurant in Piccadilly. You could stop there for a coffee after enjoying lunch at the Savini. Lean more about the Café Royal. 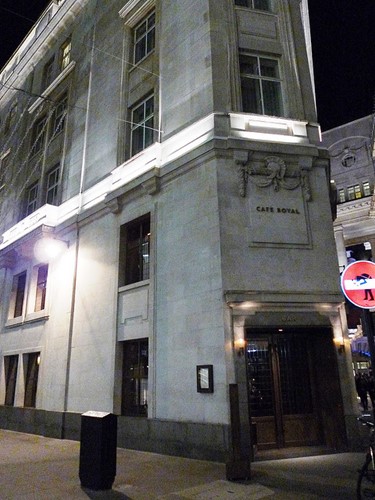 Remember we are big Sherlock Holmes fans at Montagu Place and can help you come up with a bespoke detective-themed itinerary during your stay with us! Do contact us to find out more or take advantage of our great special offers.